Solar farm plans to go ahead

Preston Farms are expected to press ahead with plans to develop a vast new solar farm near Preston Candover, following a so-called public consultation exercise, held on a midweek afternoon and early evening at the start of the main holiday season, and on an appointment only basis.

The proposal for a 28 megawatt solar site is now in the final stages of development by Preston Farms and BSR Energy and it is proposed to submit a planning application next month to Basingstoke and Deane Borough Council for permission.

The site off Church Lane covers 116 acreas in open country to the north-west of the village of Preston Candover on farm land owned by Lord and Lady Sainsbury.  The site is within the Candovers Parish Council area but the main impact of the development, if approved, will be in Preston Candover.

In a document circulated to local residents it is stated that construction and operating vehicles will be routed along the B3046 and use the existing farm access road to reach the site and “off-site cabling works are proposed which will run south-east to the point of connection.”  It is assumed that the ‘point of connection’ is likely to be the electricity sub-station in Wield Road, next to the recreation ground. But no details of the potential route for the overhead cabling and the number and size of the supporting towers/poles have been given. This could have a significant environmental impact on the village. 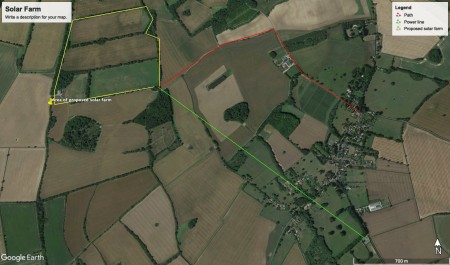 Image courtesy of Google Earth Pro.
“Off-site cabling works are proposed which will run south-east to the point of connection.”

An application was submitted in January to planning officers for advice on screening options and a decision was issued on 15 February and has recently been published.  The Landscape team at BDBC were concerned that the planned site for this solar farm covers an area of high-quality arable land and could require the clearance of several old hedges and have a major impact on the rural character of the area. This project introduces an industrial activity into an agricultural environment.  However, the Basingstoke planners have decided not to ask for an Environmental Impact Assessment as part of the main application, despite the previously expressed concerns of the Landscape Team.

Basingstoke and Deane’s landscape team reviewed the proposals and recommended that an Environmental Impact Assessment is completed to address landscape issues, and that mitigation proposals should be prepared to address the impact on the visual amenity to users of the footpaths and the rights of way near the site.  The team has asked for cross sectional and detailed drawings, which show the height and scale of the solar panels in relation to the landscape, to assess the visibility from public rights of way.

The landscape report says that the site currently comprises three agricultural fields lying within gently sloping open countryside to the north-west of Preston Candover.  A number of rights of way are within the vicinity of the site, including two adjacent to the site on the eastern and western boundaries. To the south of the proposed site lies Lilleys Copse and Chiltern Copse, both Ancient Woodlands and Sites of Importance to Nature Conservation (SINC).

“The application site also lies within the Candover Valley Landscape Character Area as defined by the BDBC Landscape Assessment (June 2001). The site and its surrounding landscape display some of the key characteristics of this area, being a mix of agricultural fields with mature hedgerows and woodland copses, unified by shallow valley sides and possessing a generally unspoilt, quiet and rural character.

“Although the surrounding landscape does not have national designation, it is nevertheless considered that it possesses a distinctive quality with a quiet rural character that is sensitive to change. In view of the scale of the proposals and the extent of the area affected, it is considered that the cumulative effects on landscape character that could result from the development are potentially significant. Adjacent rights of way that run adjacent to and close to the site, are also likely to be significantly affected in visual amenity terms and this would be particularly evident during the months of the year when vegetation is not in full leaf,” say the landscape team.

Preston Farms are seeking to develop a solar farm across the site with solar panels, which would include a substation compound and a number of transformer or battery storage containers distributed across the site. The information on these structures has not been detailed and there is no other information on any other equipment required ie: security cameras or fencing around the site. The height and size of the structures has also not been submitted.

“All of this information is required to establish the impact on the landscape character and any visual impacts the proposed solar site may have, “says the landscape team.

“It is therefore considered that the effects of the proposals are likely to be significant and the impacts on the landscape character of the area, as well as visual amenity, would need to be suitably assessed. Further information regarding the size and scale of the proposed development along with information about ancillary equipment and fencing should also be submitted to enable the assessment of the impact.”

Natural England has also been consulted.  It is a non-departmental public body whose statutory purpose is to ensure that the natural environment is conserved, enhanced, and managed for the benefit of present and future generations. It has concluded that on the information available to it at the time, that “there are potential likely significant effects on statutorily designated nature conservation sites or landscapes and further assessment is required”.  It says the proposed development is located within, or partly within, and has the potential for adverse effects on the designated nature conservation sites or designated landscapes of the North Wessex Downs Area of Outstanding Natural Beauty.