The Candover Valley is a unique rural community in mid-Hampshire, centred around a group of five villages and four hamlets and with a total population of about 2000 people. Yet, it supports a wide variety of leisure and sporting activities, and special interest groups. The villages are surrounded by open downland pasture, with mainly sheep, and arable fields growing wheat, barley, rape, and various exotic crops. We have a highly-regarded C of E primary school and a Pre-school kindergarten, catering for the very young.

The area is interlaced with footpaths and bridleways, providing access to unspoilt countryside, and giving the opportunity to wander through some of the most beautiful parts of the county and observe and enjoy its natural history.

We hope you will enjoy visiting the Candover Valley and its communities through the pages of this website where you will find much to interest and intrigue you.

If you would like, you can read a little about the history of the valley. 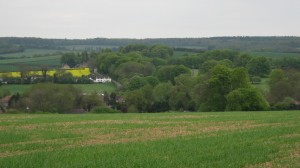 The Valley lies in a highly attractive, mainly rural area in Central Hampshire, east of the M3 motorway, within the triangle bounded by the main highways of the A30/33, the A31 and the A339, with the towns of Basingstoke, Winchester and Alton at each of its points.

The Valley itself runs north-east to south-west and winds through chalk downs and woodlands from the base of Farleigh Hill to the Itchen Valley at Itchen Abbas, a distance of 6 miles, following the route of the Candover Stream which, in more ancient times, flowed from its spring-fed source near Farleigh Wallop and coursed through the hamlets and villages of Nutley, Axford, Preston Candover, Chilton Candover, Brown Candover, Totford, Swarraton and Northington.

The road from Basingstoke to Alresford, the B3046, is set in the bottom of the Valley and follows the route of the Candover Stream for much of its way, apart from a short diversion over the hill between Nutley and Axford.

The chalk hills alongside the Valley are an important source of water for the community and as a result of extraction by farmers and water companies, the Candover Stream is now mainly a winter bourne fed by springs from south of Chilton Candover and, usually after the heavier rainfall of the winter months, only appears for a few weeks in January to March at Brown Candover and flows southwards through Totford to Northington.

At Northington Grange, ancestral home of the Baring family, the stream flows into a lake created by a dam in the 18th century, before it continues its meander to flow eventually into the River Itchen at Itchen Abbas.

Sometimes in early spring there is enough water in the stream bed at Brown Candover to float plastic ducks and to organise a ‘duck race’ for local children. Very occasionally, such as in the winter of 2000-01, and 2013-14, the springs, fed by rising groundwater, cause the stream to reappear higher up the valley with flooding of roads and houses in Preston and Brown Candovers.

The Candover Valley is a varied community centred on several large agricultural and sporting estates. Nutley, Axford and Preston Candover now form one combined civil parish, with Chilton and Brown Candovers forming another, and with Totford, Swarraton and Northington forming a third. Each of them has an elected parish council which helps to provide various services in the community. There is a primary school and pre-school kindergarten at Preston Candover which also has a village store, a public house/restaurant, a village hall, a tennis club and two churches, one now redundant.

Brown Candover has a church and the neighbouring Candover Club, and is home to the Candover Cricket Club who play their ‘home’ games in an idyllic setting with the 19th century church of St Peter’s as a backdrop. 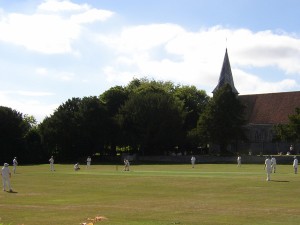 At Chilton Candover the ‘buried church’ of St Nicholas holds one service a year to maintain its status as a consecrated place of worship. The ‘church’ itself is formed in the crypt which is all that remains of the church above which was demolished in 1875. This was the second church to be built on the site. The original church and the crypt date from about 1100 AD having been built into a recess in a chalk slope with windows just above ground level. This crypt had been forgotten until it was rediscovered in 1929 by William Spiers, a local man who remembered playing in it as a boy.

At the southern end of the valley, Northington sports the church of St John, one of the grandest churches in Hampshire, built in the late 19th century.

There is a wide variety of sporting and leisure activities enjoyed within the Valley communities and more information about them is available on this site by following the appropriate links.

The Brown and Chilton document can be viewed/downloaded here; and that for Preston Candover is available here.